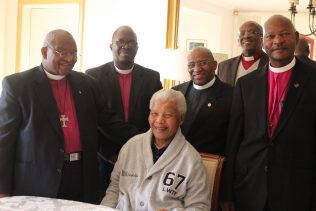 zoom
Nelson Mandela at his home in Qunu in October 2012 during a pastoral visit from the Presiding Bishop of the Methodist Church of Southern Africa, Bishop Ziphozihle Siwa and the General Secretary, Rev Vido Nyobole together with a delegation of ministers comprising Rev Dan Dabula, Rev Andile Mbete and Bishop Mangameli Noqayi.
Photograph courtesy of Bongie Moyo-Bango

In his autobiography, Long Walk to Freedom, Nelson Mandela says that both his parents were religious, but while his father believed in Qamata, the great spirit of the Xhosa people, his mother was a Christian and had him baptised into the Methodist Church. He was the first person in his family to have a formal education and went to the local Wesleyan Mission School near Qunu. This is where he was given the name ‘Nelson’ by his teacher as it was the custom to give black children white names.

When Nelson was nine, his father died and the Regent of the Thembu tribe, Jongintaba Dalindyebo, offered to be his guardian. Jongintaba and his wife were devout Christians and arranged for Nelson to attend Clarkesbury School, the oldest Wesleyan mission in Thembuland. Later he went to Healdstown, a Methodist college in Fort Beaufort.

At the age of 21, Nelson went to University at Fort Hare. Here he was a member of the Bible Society and taught Bible classes to local people on Sundays, along with Oliver Tambo. He lived in Wesley House dormitory.

Nelson retained a connection with the Methodist Church throughout his life. He was visited by a Methodist Chaplain during his imprisonment on Robben Island and after his release he attended the annual Conference of the Methodist Church of Southern Africa in 1994, 1998 and 2001. He was recipient of the World Methodist Peace Award in 2000.

Revd Ruth Gee, President of the Methodist Conference, made the following comment;

“Nelson Mandela attended Methodist missionary schools during his formative years. His understanding of Christian values was reflected in his passion for social justice. Representatives from the Methodist Church in Britain who were fortunate to meet Mandela have spoken about him with admiration: he was a welcoming, gracious and charismatic leader of exceptional ability who did not hold any bitterness about what had happened to him. During the years of his imprisonment on Robben Island, Mandela was visited by a Methodist chaplain. He will always remain loved and honoured in our hearts.”

You can read the full statement from the Methodist Church in Britain here.

We are grateful for the help we have received from the Media Offices of both the Methodist Church in Britain and the Methodist Church of Southern Africa in compiling this page and for their permission to quote from press statements. The photograph was provided by Bongi Moyo-Bango.