You are here: HomenextChapelsnextWarwickshirenextMethodism in Four Oaks

Methodism in Four Oaks did not start with the building of the church on the corner of Four Oaks Road and Lichfield Road. Francis Asbury of Great Barr, established services in a cottage at Hill Hook near to where Blake Street station stands today, the home of Edward Hand, in 1765. Asbury and Hand were great friends and Francis spent the last night locally with Edward before departing to become the founder of the Methodist Church in North America.

Edward Hand and his family were the objects of persecution, because they were Methodists. On two occasions neighbours set fire to their house. Having been granted a dissenters licence by the Sutton Coldfield Justices on 7th October 1785 they were given notice to quit their council house by Michaelmas Day 1787. Hand and his family were evicted and their furniture turned out on to the street, however Edward Hand continued to hold meetings in the area until about 1794.

The Countess of Huntingdon’s Connection established a cause during the 1770’s in cottages in Belwell Lane, which were rented to the Methodist Church from 1794. The Methodist Church later purchased the site and built a chapel in 1799.  The property was however sold to the Rector of Sutton in 1853 to be used as a dame school. The property was demolished to make way for the Waitrose Store.

A Bible, including Apocrypha, printed in 1707 was given to this chapel in 1837 it is now on display in our church today.

Methodist services were also held in a cottage in Long Lane, Hill Hook from 1847 to 1868, during the 1880’s the Walsall circuit preaching plan shows an entry of services in a cottage at the junction of Walsall Road and Belwell Lane.

After the closure of the Racecourse that stood between Lichfield and Four Oaks Roads and Sutton Park, new roads were constructed. Large houses were built towards the end of the 19th century to house the industrialists of Birmingham and the Black Country. The coming of the railway 1865 also encouraged development in the area and a group of gentlemen saw the need for a Methodist church in the neighbourhood. After much debate they decided to acquire the land at the corner of Four Oaks Road and Lichfield Road. This was a step of great faith, as no Methodist Society existed in the area at the time. The architects appointed by the newly formed Trustees were Crouch and Butler and the cost of building was £10,000, which was raised by friends and an appeal to the neighbourhood.

The stone laying ceremony was on 22nd October 1902 at 4pm, and was followed a year later by the opening on 6th October 1903 by Mr A J Webb ‘amid rain and blustery weather’. At the time of the opening only the Nave of the Church, which served as Chapel and School had been built.

These early premises soon proved inadequate and a further £4,000 was raised to complete the building with transepts, vestry and tower.

The schoolrooms were opened in 1909 and all was completed by 1910. The caretaker’s cottage was built early on and the Manse constructed in 1913, to house the first resident minister. The Manse was erected following a gift from Mr G E Lowe of £1,000.

The whole building was faced with Weldon stone and roofed with Colley Weston Stone tiles and is of mixed perpendicular, Gothic and Arts & Craft design

It was known as the ‘non-conformist Cathedral of the Midlands’ and was one of the most beautiful Wesleyan Methodist churches. Separate gifts provided the stained glass window in the chancel, the Communion table and chairs, the font and the pulpit with a beautiful panel representing Christ as the Good Shepherd.

In common with churches of all denominations at the time ‘seat rents’ were charged at 2s 6d per quarter and raised £54 in 1904. The practice was stopped when pews replaced the seats in 1930.

Membership grew steadily and activities thrived. The two manual organ, which is in use today, built by Norman and Beard was installed in 1914.  War work was tackled including the formation of the ‘ladies sewing meeting’ to make items of clothing for the ‘soldiers at the front’. A plaque in the nave commemorates those men of the church who died during the war.

During the 1920’s and 1930’s the church seemed too far from the houses being built in the Mere Green area and membership did not grow very much. However, to some, these were exciting times, a gas ring was provided for the kitchen, a microphone, amplifier and loudspeaker were installed and the present oak pews replaced the original chairs. It was during this time that the Boy Scout Group and Girl Guide Company were formed.

In 1940, a bomb fell 50 yards away, but did little damage and the stained glass widow was temporarily stored in the boiler room. Evacuees from Coventry stayed on the premises for a while.

In 1947 it was agreed to purchase an electric fire for the Church Parlour (now the Bennett Room). A suggestion was made to improve the acoustics in the church by fixing copper wires 12 feet high the length of the church.

After the construction of the new houses around Dower Road from 1955 onwards the church membership grew rapidly.

During the1950’s and 60’s as many as 70 young people met after Sunday evening worship for fellowship and seven entered the Methodist ministry candidating from this church.

But during this time the stonework deteriorated needing heavy outlay in repair costs.

In 1969 a major extension scheme was carried out and the small hall, extra rooms, new toilets and kitchen were built.

In 1976 the church became a Grade 11 listed building, which may be regarded as prestigious but does create its own problems.

In 1986 more work was necessary to provide storage space, accessible entry and toilets for the disabled and upgrading of the kitchen. 1996 saw the refurbishment of the chancel area to enable us to have a more varied style of worship. We also received the gift of a new stained glass window at the rear of the church in memory of a past member.

The centenary appeal for £200,000 was for replacement central heating, new lighting and wiring, new toilets, decorating and repairs to the tower stonework.

Multimedia equipment had been purchased in 2002 to enable and provide greater flexibility and opportunity within worship for the present time and the future.

New floodlighting was install in 2003 our centenary year.

During 2012 the kitchen was modernised to comply with current Food Hygiene regulations.

In the 21st Century we try to make the premises a worthy tribute to those who have served and worshipped here for over 100 years. 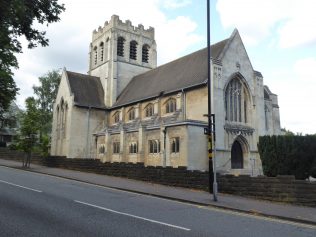 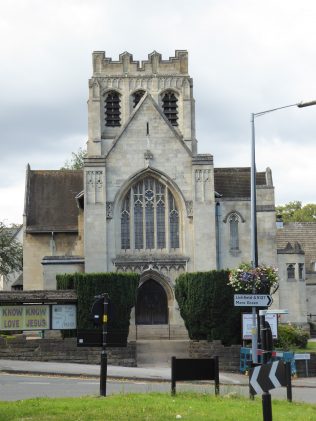 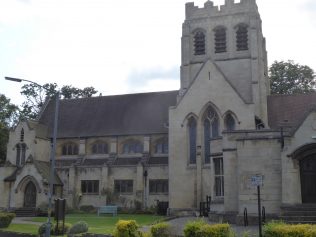 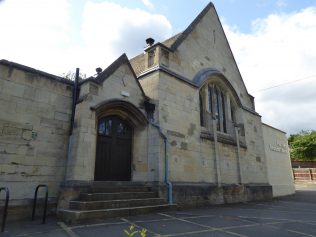 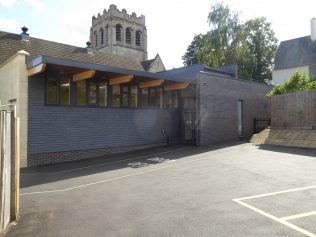 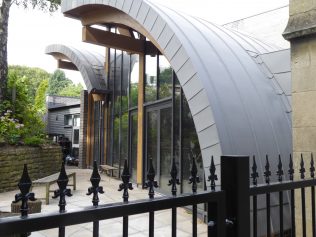