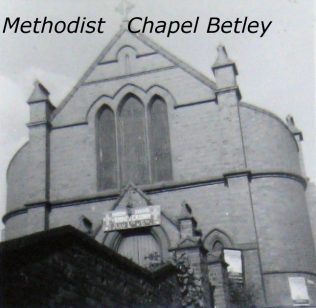 zoom
The building opened in 1907

A Methodist Society was formed in the village in 1803.

In 1808 the first Wesleyan Methodist Chapel was built.

In the mid 1990’s most of the building was converted into 5 apartments. The Sunday school rooms were retained as a chapel which is still in use today (2012).

Robert and Janet Speake, A comparison of Audley, Barthomley and Betley: their differences and similarities as revealed in three local studies.