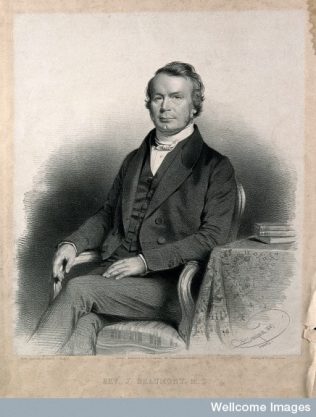 Joseph Beaumont, M.D., son of the Rev. John Beaumont; who was bom at Castle-Donington, March 19th, 1794. He was converted to God whilst a scholar at Kingswood, and during his apprenticeship was most assiduous in cultivating his gifts, and seeking spiritual advancement. At Macclesfield he derived great benefit from the ministrations of the late Rev. Melville Home, and was accustomed to attend regularly upon them, as well as at the services in our own chapel. His way would have been opened into the ministry of the Established Church by the kindness of friends ; but he preferred to remain with the Wesleyan Methodists, and was received on trial by the Conference of 1813.

He was soon recognised as a Preacher of more than common promise, and devoted himself to his work with great assiduity and seal. An impediment in his speech at one time appeared likely to impair the usefiilness of his pulpit labours; but by great resolution and perseverance he surmounted it, and became a fluent and effective speaker. His preaching was charac- terized by a cordial appreciation of the truth and power of the Gospel; by great general felicity, and frequent brilliancy, of illus- tration; by repeated bursts of impassioned eloquence, and an earnestness of manner and delivery, often amounting to impetuosity, which produced a vivid impression on his audience. It was not surprising, therefore, that his services were in great request as an occasional Preacher, and an advocate of various benevolent insti- tutions; and to these purposes they were cheerfuUy devoted, without regard to personal convenience, and in a catholic spirit.

In this class of labours he was truly ” more abundant;” and his ministry was on these special occasions, as well as in its ordinary exercise, a blessing to many. His fidelity to our doctrines was undoubted and unvarying ; and it is much to be desired that truth would permit a similar statement with regard to the discipline of the body. But here, on more than one occasion, he seriously failed; indulging an exaggerated sentiment of personal inde- pendence, which could not but interfere with his comfort and usefulness as one of an association of Ministers.

His health began to decline in the early part of last year, and a visit to the German springs yielded him but little benefit The mental exer- cises inseparable from this period of seclusion, though painful, were salutary ; and his correspondence with his family exhibited a spirit truly submissive and devout.

On returning home, he manifested tne utmost anxiety to take his full share of ministerial labour ; and, revising to spare himself, carried his efforts beyond the limits which prudence would have prescribed. Whilst engaged in the solemn services connected with the Renewal of the Covenant, as well as in those specially appointed by the Conference, to promote a revival of the work of God, he seemed to soar above all physical infirmity, and to forget self in an intense desire to do good.

In the few opportunities afforded him for pastoral and friendly intercourse with the people of his charge, during the brief interval between his arrival in Hull and his lamented decease, his spirit was uniformly devotional, and his conversational powers were studiously directed to the religious improvement of those with whom he associated.

His last sermon was preached to a few persons in a small country-place, from John xiv. 27 : ” Peace I leave with you. My peace I give unto you: not as the world giveth, give I unto you. Let not your heart be troubled, neither let it be afraid.” On Sunday morning. January 21 st, he appeared quite as well as he had been for some time, and spoke cheerfully of the state of his health.

On entering the pulpit of Waltham-street chapel, he commenced the service by giving out the 316th hymn. Omitting the first verse, he read the following lines of the second :

” Thee while the first archangel sings

He hides his face behind his wings.”

Before the congregation had finished singing these lines, Dr. Beaumont gave a start, and sank down in the pulpit. From that moment there was not a sound or a sign to indicate remaining consciousness, and it is believed that he died in the pulpit Thus suddenly closed the life and labours of this eloquent and popular Preacher, in the sixty-first year of his age, and the forty-second of his ministry.