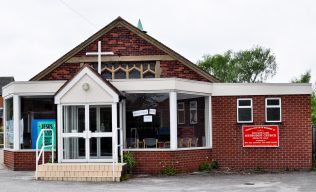 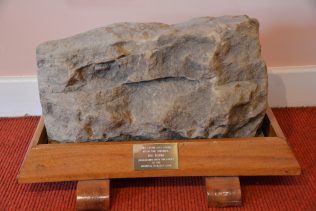 zoom
This stone was taken from the orignal Big Barn. Demolished with the onset of the Mineral Railway Line. 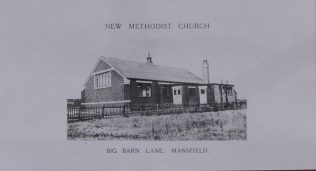 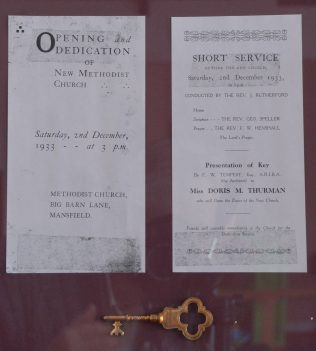 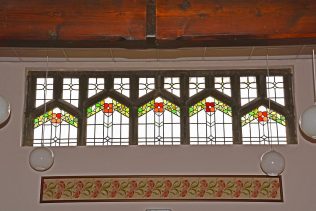 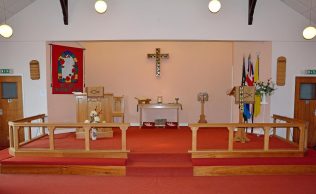 Not too much is known about the Church over the first 28 years, one can only assume that all went well with huge numbers attending Church and Sunday School.  In December 1946 a Christmas party was attended by 230 children and adults.  Father Christmas arrived and handed each one a gift.  A kind lady gave every child a bag of sweets and an apple.  An invoice from the Mansfield, Sutton & District Co-operative Society Ltd, relating to this event totals 19s.8d.

It was during the 1950s when things started to go wrong, dwindling congregations and members growing old.  Rev. Porter was the Minister during this period.  The Church was unable to pay its assessment to the Circuit and apart from keeping the Church clean, little was done to the property.  In 1961 the membership was down to six or seven elderly ladies and gentlemen who defiantly resisted the closure of the Church.

It was at this time that new houses were built on land adjacent to Oak Tree Lane and in August 1961 John and Gladys Booth and their two sons, together with Mrs Jones the mother of Gladys, moved into the area and they decided to make Big Barn Lane Church the place where they would worship.  Pastor Childs replaced Rev. Porter sometime during 1962 and gave his support to a new concept of worship at Big Barn Lane.  In September 1962, the area around Big Barn Lane was visited and invitations headed “Christianity is a Family Affair” were handed out and thus Family Worship, lasting just 45 minutes and designed to suit all ages was introduced.  The first Sunday, 7th October 1962, sixty people attended and on the second Sunday over one hundred were present.  The area was visited again in the Spring and on Sunday 19th May 1963 a special Family Church Festival was held and the preacher was Mr. Ernest Shead, a wonderful man and friend of Big Barn Lane.

The Bridge Street Circuit gave its support and declined to accept any payment of the assessment for a whole year to give Big Barn Lane time to get on its feet again.

At this time folk of all denominations were attending e.g. Baptists, Anglicans and Quakers, the emphasis was on the Family as the nucleus of Christian Life.  Love and affection from God was shared among us all and we felt it was a privilege to worship at Big Barn Lane Church.

In 1963 the Rev. George Hartley was appointed, the Rev. J. F. Jones was the Superintendent Minister of the Circuit and on the 22nd March 1964 (Palm Sunday) a Service of Membership was conducted by the Chairman of the District, Rev. Wilfred Wade was held during which eighteen new members were received and nine members had their membership transferred.  The total membership was now 52.

In 1964 the Rev. Norman Burrows was appointed.  Improvements were made to the property, interior decorating was carried out at a cost of £135 and due to the generosity of members who wished to remain anonymous the exterior of the Church was painted and the garden at the front was removed and the area concreted.  In September 1964 a double decker bus was hired to take members of the Church to the United Service at Bridge Street Church and the whole of the left hand side of Bridge Street Church was taken up by Big Barn Lane folk.

The Church did have two sets of moveable screens which divided part of the Church into a hall and after 1966 the hall was in almost constant use.  In November of that year Rev. Burrows formed Youth Clubs, senior and junior.

In 1968 a Sunday School commenced and numbers had to be limited to 40 due to lack of space.  The Corner Playgroup started to meet two mornings per week.

In 1970 the Rev. E. Smith and in 1972 the Rev. George Cooke became our Ministers and the Church Membership stood at 54.  The Young Wives met once a fortnight and had a membership of 50.

The Church had suffered from petty vandalism for quite a while, but at the beginning of September 1974 severe damage was done to most of the windows in the Church.  The members rallied round to clear up the fragments of glass which had embedded themselves into the wicker chairs and the Playgroup equipment, to enable the Church Service to take place the next day.  The cost of replacing the windows and fitting wire mesh guards was £728.97.  A lot of money in 1974!

By 1975, the lack of space was becoming a problem.  The Playgroup continued to use the hall during the day, the Young Wives met on Tuesday evening, the Slimming Club on Wednesday evening, a Pop Group practised on Friday evening and as one member declared we were trying to get a quart into a pint pot.  On the 23 May 1978 a special Church Council Meeting was called to discuss the feasibility of building a new Church Hall.  The meeting was informed that there was a possibility of obtaining a 75% grant from the Department of Education and Science.  It was estimated that the cost of a building would be in the region of £25,000 – £28,000.  The meeting agreed unanimously to proceed with the application.

In June 1978, the Mother and Toddler group commenced and by September about twenty mothers with between 30 and 40 under fives were attending.  Requests were received to commence a Brownie Pack, Guides and Scout Groups.  A new hall was imperative.

At the Church Council Meeting on the 5th October 1978 the Superintendent Minister, Rev. H. Warne chaired the meeting and said that although he was right behind us in the proposal to build a new hall, was this the right site.  His proposal was that we should joint with Bridge Street Church in building a new modern Church on the land down Racecourse Road.  The meeting agreed to Rev. Warne exploring the possibilities.  A questionnaire was given to the worshipping congregation at Big Barn Lane to ascertain their feeling on amalgamation with Bridge Street.  Reservations were expressed regarding the different services held by the two Churches.  On Tuesday 6th March 1979 a joint meeting was held.  Rev. Brice informed the meeting that Big Barn Lane had obtained the grant from the Department of Education and Science and were now wanting to move forward, there was plenty of land at Big Barn Lane for expansion and it was felt that the Church on Big Barn Lane was a truly local Church serving more on foot than by car.  Bridge Street had no immediate prospects of selling their premises, they expressed their pleasure at Big Barn Lane’s progress and hoped that this would continue.  All present at the meeting agreed that Big Barn Lane should go ahead with the new hall.

The Opening and Dedication of the New Church Hall took place on 20th September 1980 and the building has been used to full capacity ever since then.

At the Church Council Meeting held on the 24th October 1985, the members were informed that the railway cutting at the side of the Church was to be filled in and that there was a possibility that Notts. County Council would be interested in purchasing some of the land at the rear of the Church Hall.  This was very exciting news, as the land had given many problems over the years and the prospect of having proceeds from the sale to improve the Church facilities was welcomed.  At the Church Council Meeting on 5th February 1987 it was agreed to consult an Architect and seek professional advice to improve the Church.  Notts. County Council paid £16,300 for the land.  The scheme cost £70,000 plus and the Reopening and Dedication Service took place on Saturday 28th October 1989 at 2.30pm led by Rev. John Dimmock and with guest preacher the Rev. Derek Brice.

By 1988 the hall was showing signs of deterioration and several panels were replaced and by 1990 more were required.

Rev. Norman Bray joined us in September 1990 and at the Church Council Meeting on 12th June 1991 it was agreed that the Property Committee look into the possibility of repairing and improving the hall.  Quotations were obtained for rebuilding the hall in brick and refurbishing the toilets and kitchen, the figure arrived at was £21,898.48.  The offer of an anonymous loan was made and the Church Council decided to accept and proceed with the work before further deterioration took place.

The Church Membership now stands at 75.

During the years the Church, as well as maintaining its buildings, has supported its Overseas Missions, Home Missions, National Children’s Home etc., and during 1993 a total of £1,341.92 had been given to charity.  At the same time the Church has endeavoured to provide pastoral care and support.

The church communion area was altered in 1989 moving from the front of the church to the back. New altar rails, table, pulpit, chair and lectern were made to replace the original furniture. The font was designed and made to match the lectern by Mr. Arthur Atkins husband of Mrs. May Atkins a member of Big Barn Lane Methodist Church.

Thanks also to Mr. Brian Jones also a member of the church who designed and made the cross above the altar table using stained glass from an old side entrance window (actually saved from a skip).

There are two kneelers resting at the foot of the altar table, the needlework was done by Mrs Jean Yeomans and Mrs Irene Hindmoore and donated to Big Barn Lane Methodist Church by Mr & Mrs C. Baggaley for this occasion.

There is a stained glass window at the front of the Methodist Church above the place where the original communion area used to be with the same glass as used in the Cross.
Below the window there is a tapestry on the wall, this was sewn by a church Mrs Irene Hindmoore, and then framed.