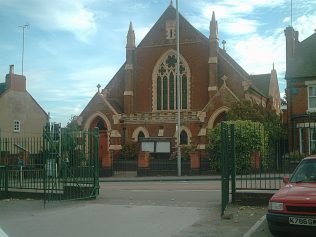 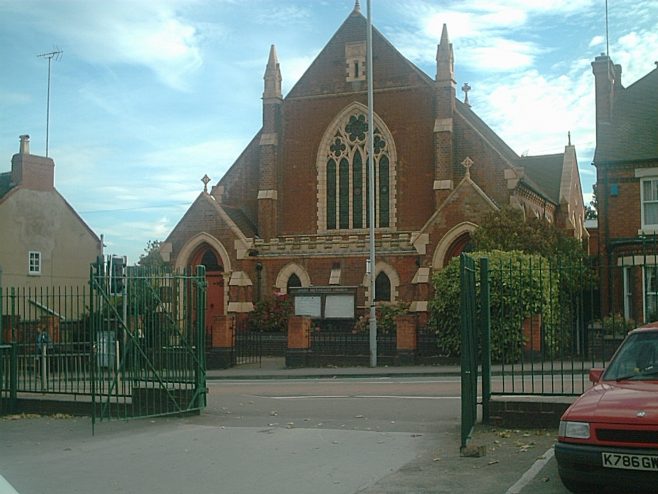 (From a booklet specially produced  for the occasion).

As the years passed by, it was borne upon the Ashby members that no longer should they worship in a side street, but that ground must be purchased for a new Chapel and Schools in a more prominent place.
Thus, during the ministry of Rev. J. W. Gregory, in 1905, a plot of ground in New Burton Road was purchased at a cost of £250.
Then began a great work through sewing meetings, teas, suppers and family offering boxes. The generosity of folk who had large families and so little of this world’s goods cannot be measured. His Kingdom must be furthered, whatever the cost!
A member of the Church, Mr. Harry Smedley, was chosen as Architect of the new buildings. He designed a Church in the Gothic style, adapted to modern requirements, 53 feet by 35 feet and 8 inches, and 40 feet wide at the transepts; the internal wood-work being all of varnished pitch pine, and the windows, buttresses, etc., being all of buff terracotta from the Coronet Works, Measham. (These latter having been designed by the architect, and made under the direction of Mr. George Ree.)
The tender of Messrs. T. Orton and Son of £2,175 was accepted by the Committee.
The Schools were built first, and opened at the end of December, 1905.
The Stone-laying Ceremony of the new Church took place on 7th March, 1906, before an illustrious gathering, under the chairmanship of the Rev. J. W. Gregory.
The first stone was laid by Sir Chas. McLaren, Bart., and M.P. for the Bosworth Division. Other stones were laid by representatives of various Churches and organisations in the area.
At the evening meeting, under the chairmanship of Mr. J. P. Adcock,J.P., the speakers were Rev. J. D. T. Humphries and Mr. Moses Bourne.
Mr. Gregory announced that the sale of the old Chapel bad realised
£380 (out of this an old debt of £170 had been paid off), and that so far£1,150 had been raised towards the new building.
On that day a further £450/11/- was gathered in, and still more on the following Saturday, when bricks were laid by the scholars.
The great day came when the work was completed. On the 22nd August, 1906, the Chapel was opened for Public Worship.
At 2.45 p.m., Mr. Gregory conducted a short service at the front, then Mrs. Stubbs (Lemington), an old scholar, performed the Opening Ceremony, and the doors were opened to the Congregation.
The first service was conducted by Rev. J. H. Saxton (Leicester). After tea, the Public Meeting was addressed by Mr. Saxton, under the chairmanship of Councillor G. Hilton (Leicester).

The life of the new Church

It was not until 10th January, 1912, that the first “At Home” to raise money for Trust Funds was held. This was introduced by Mrs. Jabez Bell, and she and her brother, Will Smedley, were host and hostess. The grand sum realised was £4/13/-! Now the Annual “At Home” is the Trust Effort of the year.
In April, 1913, individual Communion glasses were introduced in place of the communal silve