Welcome given to German POW's 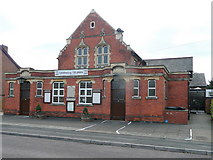 A German POW camp was situated less than a mile from Lonsdale Road Methodist Church, Gloucester.

In 1947 the prisoners were allowed out of their camp on Sundays to attend Church. Our 6.30 pm Service became packed with these men in their uniforms (with patches on the knees and elbows). At first, as a child of 12 I found their presence and the powerful male voice singing quite intimidating, for these were our ‘enemies’. Some Church members, including my parents, started inviting them to their homes for tea before the evening service.

One of the men who visited us each Sunday was called Reinhold Luther. He came from Wittenberg and told us he was a direct descendant of Martin Luther. Reinhold was an enormous man who wore size 13 shoes. When they were eventually repatriated he promised to write, but we never heard from him again, and we fear that he may never have been restored to his family.

I still have his autograph in my autograph album, dated 26th July, 1947. This encounter prompted me to opt to study German at school the following year and later at University.