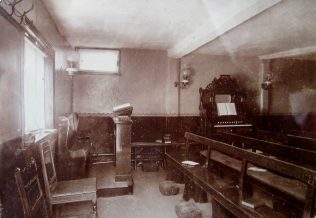 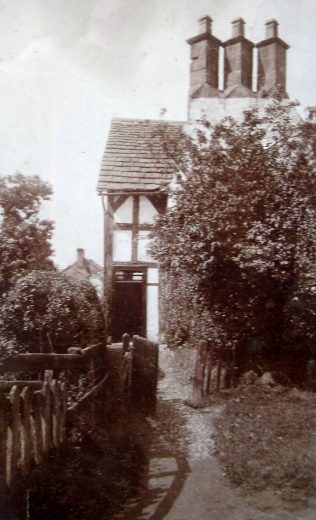 zoom
The entrance to the preaching room 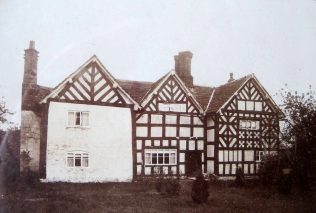 Soss Moss Hall was built in 1583 by Thomas Wyche. The estate was purchased in 1753 by the Stanleys of Alderley and from 1835, during the tenancy of the Baskerville family,  they allowed the kitchen to be used as a Methodist place of worship. In fact Lord Sheffield and his son the Hon Lyulph Stanley made it a condition of the tenancy to maintain the place as a Methodist Chapel. This ceased when the Stanley estates were sold in 1938 and, following a change of tenants, the Chapel closed in 1940.

Randle Baskerville and his wife Margaret were the instigators of the work, followed by their sons James and Thomas and then Thomas and Betsy’s children, Jesse, Margaret, Randle, Frank, Sarah Jane, Ruth and Annie. Annie played the organ for over 20 years.

The most outstanding events held over the years were the Chapel Anniversaries held in a tent on the Hall lawn, the Harvest Festival celebrations and the Missionary Meetings (preceded by tea in the Hall)

For 86 years the society at Soss Moss contributed around £20 a year to the Circuit Missionary funds, part of the money being raised by a brass band comprised of local farmers. Click here for a link to a page about the band.

A local preacher, Mr W. Wheeldon, wrote an article for the local paper when the Chapel closed on 29 December 1940, including the following transcribed extracts;

Over a century ago, 105 years to be precise, there was started a small society called Methodists, in a portion of a farmhouse at Soss Moss Hall, Nether Alderley.  Through all the long years this Society has continued to meet, and in quiet and unostentatious ways has witnessed for Methodism and Missionary enterprise with great effort.  In this year of historic happenings, which has seen the beginning of the collapse of many things and systems, there must be recorded the closing of this gallant little church, brought about largely by a change of tenancy on the farm.

During the last eight years the care of Nether Alderley Chapel has been vested in Mr Ernest Webb, of Sandle Heath Farm and his wife, to whom the closing of the place has brought a pang of regret happily mingled with and mitigated by sweet and abiding memories for it was to this little Methodist Chapel that Mr Webb, along with other members of his family, was brought by a saintly and honoured father and mother more than 50 years ago.  Nether Alderley has all along the years fulfilled its function as a place of worship where some of the finest types of English yeomen have worshipped God according to their conscience and in the spirit of true non-conformity, receiving the Grace of God in all humility, which has helped them to face life courageously and unafraid.

So passes another of God’s outposts – not in sorrow so much as in thankfulness to Almighty God for the work, which has been accomplished, and the blessings received in its history of 105 years.  The history closes in nationally dark days, but the message and the witness of Nether Alderley lives, and is surely working its purpose out in the belief it has always sustained that the future will see the blossoming and the fruition of the cause of freedom, justice, tolerance and a return of the nation to God and His cause, for “Our God is Marching On.”