You are here: HomenextChapelsnextAround the WorldnextAllmersbach am Weinberg (and Basingstoke)

Allmersbach am Weinberg (and Basingstoke)

An early lesson in preaching 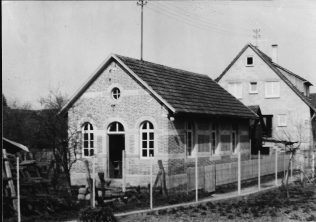 Having been converted in Basingstoke in 1963, and begun to preach in the Circuit in 1965, I went to Germany for a while to work as a postman, and attended Zion Methodist Church, Backnang. I got on well with one of the ministers, a young pastor called Reinhold Braun, and he invited me to preach on 2nd May at the Methodist chapel in Allmersbach am Weinberg (the chapel in the photograph). I preached on Jesus’s words in John 10:10 – “I came that they may have life, and have it abundantly.”

The minister was in the congregation, and I asked him afterwards what he thought of the sermon. He was honest enough to tell me that my preaching was dry. I believed this was due to my need to get up at 4.30 for work, and inability to get to bed early, because I was sharing with one of the sons of the house where I was lodging. There was nowhere in the house where I could easily be alone for prayer morning or evening, and my private devotions had somewhat gone by the board.

I have preached in many places over the years since 1965, but Allmersberg was a lesson I have never forgotten: preaching will be dry if it is not delivered from a life of private prayer.